During the February Photo Share presentation, two of the photographs I took last month of Historic Mariposa County were shown alongside photographs from several professionals.  I felt excited, but quite inferior.  My images looked okay when viewed on a computer monitor, but they did not transfer well to the big screen: the cropping was wrong and the images themselves weren’t as sharp as I hoped they’d be.

Lupine found on the Stewartville Trail in Antioch, CA. March 2015.

After the meeting I spoke with club member Rose (not her real name), a professional photographer.  During our conversation I think she realized how inexperienced I am.

She taught me a little about my point-and-click camera.  “It’s shoot, point-and-shoot,” she corrected me.  “Oh!” I replied, a little embarrassed.  “There’s a setting–a flower icon–that I think means use when photographing flowers,” I said excitedly since April’s photo assignment is wildflowers.  “I use my flower setting a lot while hiking,”  I mentioned.

Cherry Blossom on my parents’ tree in Antioch, CA. March 2015.

Rose cringed and taught me that the flower icon is a universal symbol meaning the camera is in macro mode.  It is used for photographing subjects with magnified results—such as close ups of flowers. 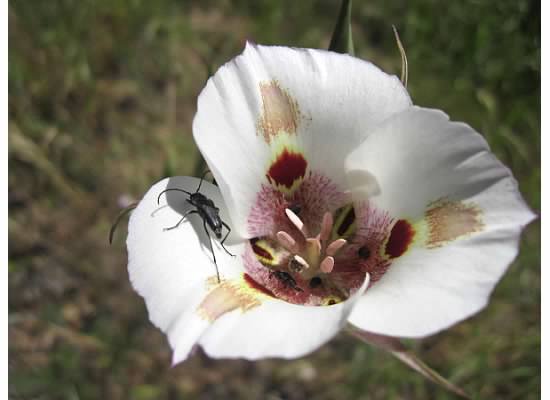 Mariposa Lily found near my home. May 2014

Rose talked quickly about other things.  I tried to take notes: optical zoom versus digital zoom, megapixels, aperture, shutter speed, ISO, and Canon versus Nikon.  My head was swimming and I felt overwhelmed.

Fireweed found on the Bridalveil Creek Trail in Yosemite. July 2014.

Not to mention during the meeting I volunteered to be the club’s webmaster.  Something else to learn!  Here’s a link to the website.

I will be happy if I can learn one thing per month about photography or my camera.

If I can take two good photographs per month I will be really happy.

Grassnut (or Ithuriel’s Spear) found on the Star Mine trail in Antioch, CA. March 2015.

You’ve been viewing some of the wildflowers I’ve photographed using the macro mode on my point-andshoot camera.  They’re still not as sharp as I’d like, so maybe it’s time for a camera upgrade.