In the last post, I mentioned that I had learned a lot during April’s photo club meeting.  Jack (not his real name) did a presentation on basic level photography and talked about rules.  I didn’t realize there are rules to photography.  Actually, they are guidelines to help you acquire a composition that is pleasing to the eye.  Here is what Jack discussed:

MOVEMENT: Movement within the composition draws your eye through the photograph.  Movement can be represented by a road, lines, a river, etc.  The image below shows movement.  Your eye follows the meadow as it curves through the trees, but what is the subject?  There isn’t one.  I have a tendency to shoot the landscape while I’m out hiking for a lasting reminder of where I’ve been.  I also learned that the eye goes to the brightest spot in a photograph, in this case, the clouds. 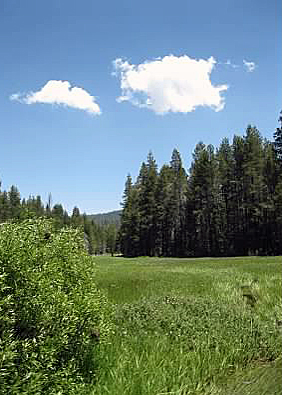 BACKGROUNDS:  In the image below, the subject is Julia.  However, another rule is to avoid busy backgrounds.  There is a lot of distraction behind Julia, much of which could have been cropped out.  Jack talked about cropping the image while it’s in the camera.  I don’t know if I heard that correctly, but will ask at the next meeting.  The easiest way to get rid of the background would have been to move Julia to a less busy spot. 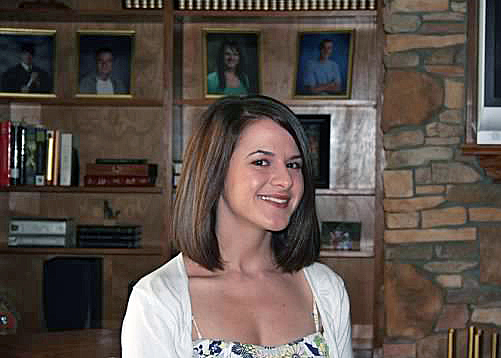 VIEW POINT:  I learned to consider changing my view point before shooting a photograph.  Look up at or down on the subject instead of shooting at eye level.  Moving around gives a different perspective and possibly a more pleasing photograph.

Looking up at Chris and Andrew coming down a trail at Packer Lake. May 2004

PATTERNS AND SYMMETRY:  Patterns and symmetry make interesting photographs.  The image below could have been much better if I would have faced the rusty doors when shooting instead of standing to the side of them.

RULE OF THIRDS:  Another important factor when setting up a composition is the rule of thirds.  Jack was confidant that we all knew what that meant.  Much to the chagrin of the professionals in the room, I raised my hand and asked him to explain.  Basically it’s dividing your photograph into nine equal segments using a grid: two horizontal lines and two vertical lines.  Most cameras show that grid through the viewfinder (mine doesn’t).  The subject of your photograph should be placed on one of the lines, or better yet at an intersection.  This can also be accomplished with creative cropping.  In the image below, Andrew’s nose aligns at an intersection.

Andrew on the trail to Waterwheel Falls in Glen Aulin, Yosemite. June 2013

DEPTH OF FIELD:  The image above shows movement and depth of field.  Depth of field helps the photograph have a 3D feel accomplished by having objects in the different layers.  The objects here are Andrew in the foreground; the river and trees in the middle ground; and the mountains in the background.  (One good photograph out of 500 taken, pure luck.)

Last, but not least we talked about framing within the composition, which is the photo share assignment for May.  I will discuss that in the next post.

5 thoughts on “There are Rules?”